Home1 / News & Articles2 / 1.7 Million Guns Sold In October: What Americans Are Scared Of?

The annual gun sales in the US shattered all records in 2020. This year’s statistics on background checks for the sale of a firearm has already surpassed the previous annual record set in 2016.

According to the US National Shooting Sports Foundation (NSSF), the sale of firearms till October 2020, has already surpassed the previous annual record set in 2016.

According to experts, this year’s spike in gun sales came when the COVID-19 pandemic hit the US in March, making it the worst-infected nation in the world. A picture also emerged when people went to buy food items before the lockdown and then to buy weapons and returned home. 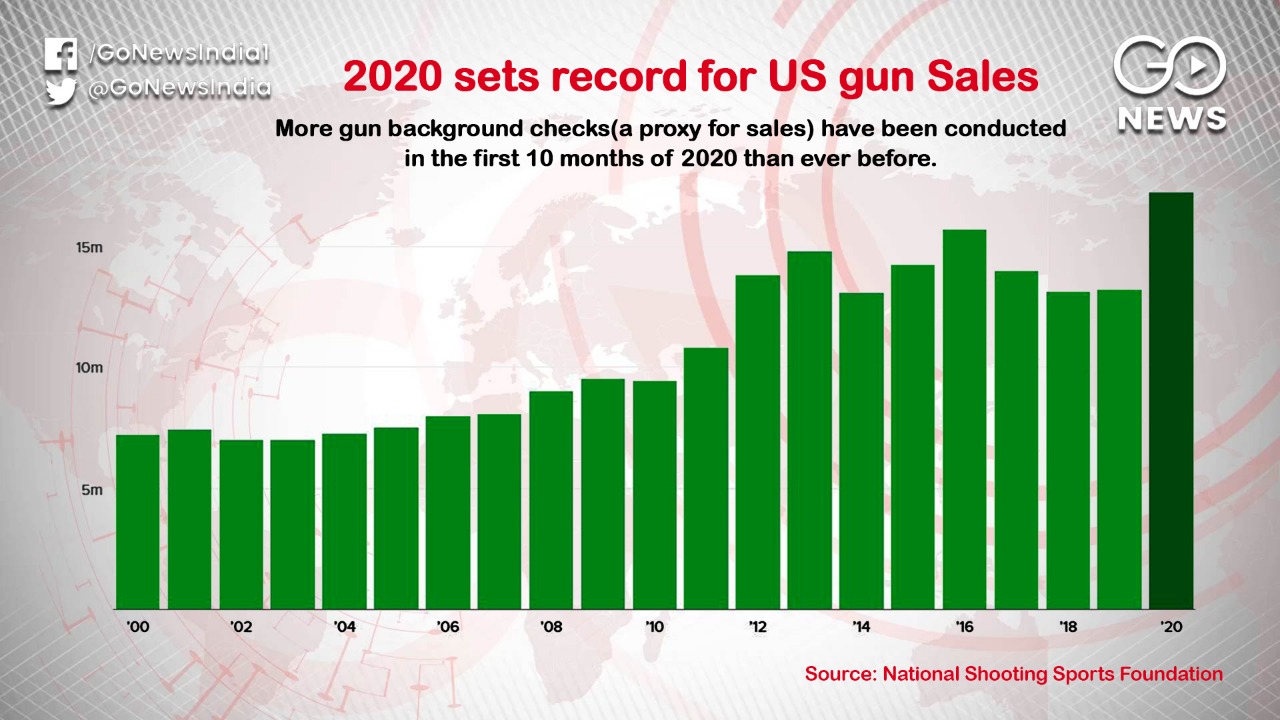 The NSSF said over 17.2 million background checks were conducted for gun owners who purchased guns this year, compared it to 15.7 million checks for firearm sales in 2016, the year which saw the record sale.

Demand for guns has increased every month across the US since March. The group determined that every month in 2020 since March has “been the strongest of that month ever recorded”. In October alone, background checks were conducted for more than 1.7 million firearms buyers, an increase of over 60% compared to the same period in 2019.

The most surprising thing is that 17.2 million guns have been sold in 2020, out of these 5 million guns were purchased by first-time buyers. The first reason behind this is the ongoing ‘Black Lives Matter’ protests against police brutality in many states of America, which have witnessed many incidents of violence and vandalism, and the other is the Coronavirus pandemic.

Gun sales are expected to increase even more during the holiday season. November and December have always been considered the busiest months of the year for the sale of guns.

Though gun control is a sensitive issue in the US because, for most American people, owning a firearm is tied to their personal freedom. According to a study, on average, there are 120 guns for every 100 US residents. Recently, after the firing in many public places, demand has also grown that owning a firearm be made more strict in the US. However, the huge sales of weapons this year do not make it easy to do so.

This site uses cookies. By continuing to browse the site, you are agreeing to our use of cookies.

We may request cookies to be set on your device. We use cookies to let us know when you visit our websites, how you interact with us, to enrich your user experience, and to customize your relationship with our website.

Click on the different category headings to find out more. You can also change some of your preferences. Note that blocking some types of cookies may impact your experience on our websites and the services we are able to offer.

These cookies are strictly necessary to provide you with services available through our website and to use some of its features.

Because these cookies are strictly necessary to deliver the website, refusing them will have impact how our site functions. You always can block or delete cookies by changing your browser settings and force blocking all cookies on this website. But this will always prompt you to accept/refuse cookies when revisiting our site.

We fully respect if you want to refuse cookies but to avoid asking you again and again kindly allow us to store a cookie for that. You are free to opt out any time or opt in for other cookies to get a better experience. If you refuse cookies we will remove all set cookies in our domain.

We provide you with a list of stored cookies on your computer in our domain so you can check what we stored. Due to security reasons we are not able to show or modify cookies from other domains. You can check these in your browser security settings.

We also use different external services like Google Webfonts, Google Maps, and external Video providers. Since these providers may collect personal data like your IP address we allow you to block them here. Please be aware that this might heavily reduce the functionality and appearance of our site. Changes will take effect once you reload the page.