A 20-year-old man arrested Tuesday morning is facing a slew of charges for allegedly breaking into a home, stealing a car, and then leading police on a chase.

Authorities said that officers responded to the 2200 block of 6th Street SW in Akron just before 5 a.m. for a home invasion.

One of the residents told police that three men broke into the home at gunpoint and took cellphones, a television and a wallet, authorities said.

About half an hour later, officers responded to the 800 block of Biruta Street for a carjacking.

The victim told police that she was getting gas at Circle K in the 1600 block of East Avenue when a man walked up to her and then took her Nissan Murano at gunpoint, authorities said.

About an hour later, police located the stolen vehicle on Sheridan Street in Akron. Officers approached the vehicle, but the driver sped off. Officers pursued the stolen SUV through several neighborhoods on the city’s West Side but then called the chase off due to excessive speeds and the driver leaving Akron city limits.

Around 7 a.m., Officers from the Norton Police Department responded to a crash near Medina Line and Greenwich Road, according to authorities.

According to police, the home invasion, carjacking and chase were determined to be connected.

Jessmer has an arraignment scheduled for 9 a.m. on Wednesday at Akron Municipal Court.

The matter remains under investigation. The other two individuals involved have not been arrested.

Contact Bee Safe Security and learn how we can help increase your home security.

Choosing the perfect rifle scope to pair with your firearm and ammunition combination will help you make sure to hit your target every time. Narrowing your choice of scopes involves considering mechanics, construction, image quality and magnification. When selecting a scope you should keep in mind when and where you shoot most often, and pick a rifle scope with features that best fit the requirements of your particular sport.

The internals or inner workings of a scope have a direct effect on how accurate you are when shooting. As you make adjustments when sighting your rifle in, the cam tube that holds the lenses and reticle in place will move inside of the scope. The cam tube must be strong enough to absorb the impact of the heavy recoil produced when shooting so the reticle stays in place shot after shot.

The best image quality is going to come from an optic that allows as much light as possible to pass through the exit pupil to the shooters eye. The brighter the image is, the more sharp and clear it is going to appear when looking through the scope. Factors such as glass quality, lens design and coatings will impact the scope’s ability to manage light effectively. When selecting your scope, consider magnification, objective lens size, exit pupil, resolution, field of view and eye relief.

The magnification you choose for your rifle is an important factor and should take into account what you plan on using the rifle for. 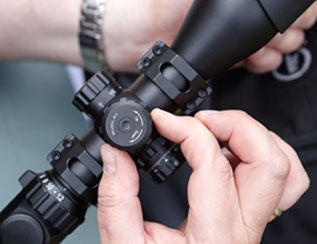 • Low power – (example: 1.5-6×32, 2-7×32)
Scopes in this power range will be ideal for close range targets and moving targets thanks to their wide field of view. They will also provide the most effective light management and produce a brighter sight picture even in low-light conditions. Shop Low Power Scopes

• High power – (example: 6-18×40, 6-24×40)
Scopes in the magnification range are great for target shooting when the target is motionless and for varmints and other small game. Shop High Power Scopes

Have a question? Contact a Bee Safe Security instructor today.

Bee-Safe Security has learned that due to health concerns about COVID-19, some Ohio Sheriff offices are temporarily suspending applications and renewals for Concealed Handgun Licenses, or limiting hours for license processing. The policies on CCW applications varies from county to county.

It is unclear at this time how long the situation will last although it appears to be a temporary measure to protect the health of both law enforcement staff and citizens.

Be aware that Ohio law currently specifies that citizens have a 30-day grace period after your CCW/CHL expiration date during which time your license remains valid.

During this worldwide COVID-19 crisis, law enforcement and private security personnel are not only expected to continue their usual levels of service to the public, but are also expected to assist in community and government efforts combating the virus. It is important that private security officers and LEOs are aware of the following information:

Below are (4) helpful guidelines from the Center for Disease Control (CDC) that law enforcement and security officers should follow to stay safe during the Coronavirus pandemic.

Ultimately, be aware of who you are coming in contact with and watch for signs of exposure. Keep your distance – 6 feet rule. Follow common sense hygiene protocols including frequent hand washing. Do not hesitate to ask for EMS / EMT assistance if you think you need it. Remember, you are a key component in combating this virus and keeping your community safe, so be safe and stay healthy.

For more information visit the CDC website at: https://www.cdc.gov/coronavirus/2019-ncov/community/guidance-law-enforcement.html

This site uses cookies. By continuing to browse the site, you are agreeing to our use of cookies.

We may request cookies to be set on your device. We use cookies to let us know when you visit our websites, how you interact with us, to enrich your user experience, and to customize your relationship with our website.

Click on the different category headings to find out more. You can also change some of your preferences. Note that blocking some types of cookies may impact your experience on our websites and the services we are able to offer.

These cookies are strictly necessary to provide you with services available through our website and to use some of its features.

Because these cookies are strictly necessary to deliver the website, refusing them will have impact how our site functions. You always can block or delete cookies by changing your browser settings and force blocking all cookies on this website. But this will always prompt you to accept/refuse cookies when revisiting our site.

We fully respect if you want to refuse cookies but to avoid asking you again and again kindly allow us to store a cookie for that. You are free to opt out any time or opt in for other cookies to get a better experience. If you refuse cookies we will remove all set cookies in our domain.

We provide you with a list of stored cookies on your computer in our domain so you can check what we stored. Due to security reasons we are not able to show or modify cookies from other domains. You can check these in your browser security settings.

We also use different external services like Google Webfonts, Google Maps, and external Video providers. Since these providers may collect personal data like your IP address we allow you to block them here. Please be aware that this might heavily reduce the functionality and appearance of our site. Changes will take effect once you reload the page.